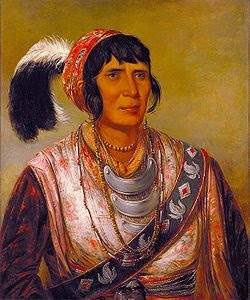 Chief Osceola
Osceola was born as Billy Powell in 1804. Where he was born is not agreed upon.  His mother was Polly Coppinger, daughter of Ann McQueen.  Ann McQueen was part Muscogee Native American and part Scottish.  His father is reputed to have been an English trader named William Powell.

In 1832 a few Seminole chiefs signed a treaty called the Treaty of Payne's Landing.  In this treaty a few Seminole chiefs agreed to give up their Florida lands in exchange for lands west of the Mississippi River.  However, five chiefs did not agree with the treaty.  At this time Osceola was a young warrior and was very upset about the treaty.  He felt it enslaved his people.

In 1835 the United States agent for Native Americans called a council of the leaders of the Seminoles to get the Seminoles to agree to follow the terms of the Treaty of Payne's Landing.  During that council, Oaceola rose and plunged his dagger ghrough the new tready exclaiming:

"This is the only treaty I will make with the whites!" 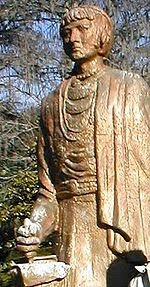 Osceola Stabbing the Treaty
The agent for the Native Americans in that area was named Wiley Thompson.  At first Osceola and Wiley were friends, but one day, Wiley locked Osceola up when they had a quarrel.  Because of that, Osceola killed Wiley Thompson.